The table below and the attached key provide a rough guide to the identification of specimens found in the main caving areas of Britain.  Antrobathynella could potentially occur in all of the areas below, but is unlikely to be seen with the naked eye and is more commonly recorded from springs, wells and boreholes, rarely in caves: Ogof Draenen in South Wales, the Corsham stone mines in Wiltshire and a few caves in Yorkshire.  Crangonyx subterraneus is also rare in caves and mines, mostly occurring in wells, boreholes and springs, especially those in the Chalk.  So far it is only known from Ogof Pant Canol, South Wales, and from Reservoir Hole and Gough's cave in Cheddar Gorge on the Mendips.  The same comments apply to Niphargus kochianus, the only extant cavernicolous population being that in the lake in Pen Park Hole, Bristol.

In Irish caves Niphargus irlandicus (4-5mm) is by far the most commonly encountered species, although Microniphargus is known from a few caves on the Burren (Co. Clare) and Niphargus wexfordensis (4-5mm) has also recently been recorded from a few Burren caves and a single cave in Co. Cork.  The latter can be separated from N. irlandicus by the shape of its gnathopods and epimeral plates (see under species' descriptions) but this would be almost impossible in the field and both species have been recorded in at least two caves on the Burren (even in the same pool in the Doolin River Cave).  In Ireland Gammarus pulex is an introduced species, the native species being Gammarus duebeni celticus, which occupies the same niches as G. pulex does in Britain, hence it is also likely to be found in many Irish cave streams, notably those that sink at cave entrances.  As with G. pulex, the presence of eyes will separate it from any hypogean Crustacea species and the comments for G. pulex in the table below also apply, see also photographs and comments at the bottom of the page.  Antrobathynella is known from just a single Irish site: amongst riverine gravels beside the River Flesk at Killarney, Co. Kerry. 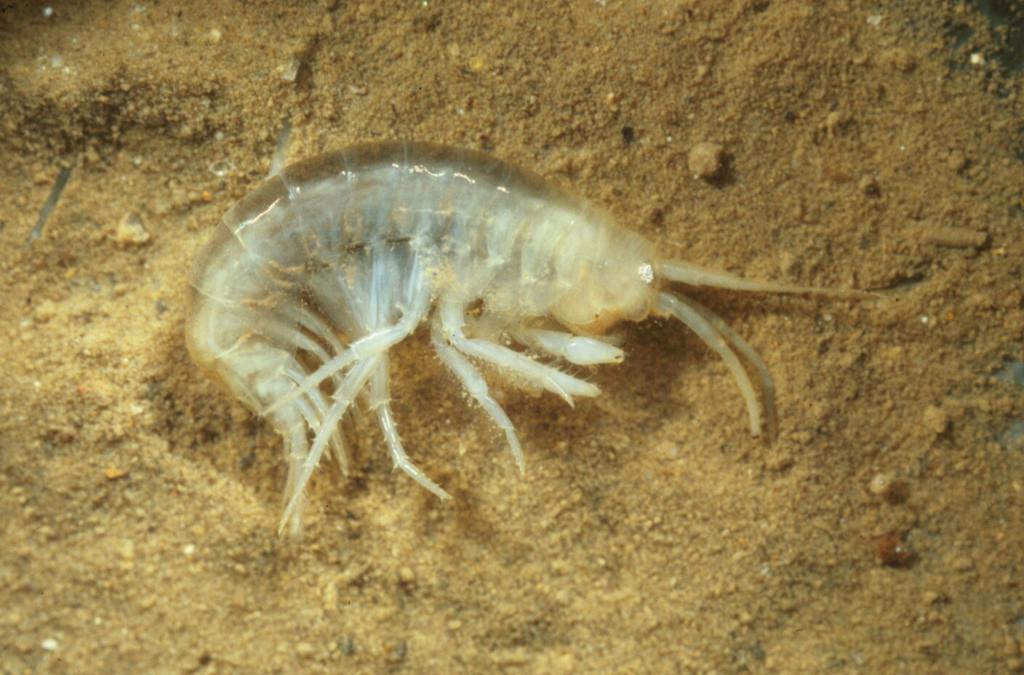 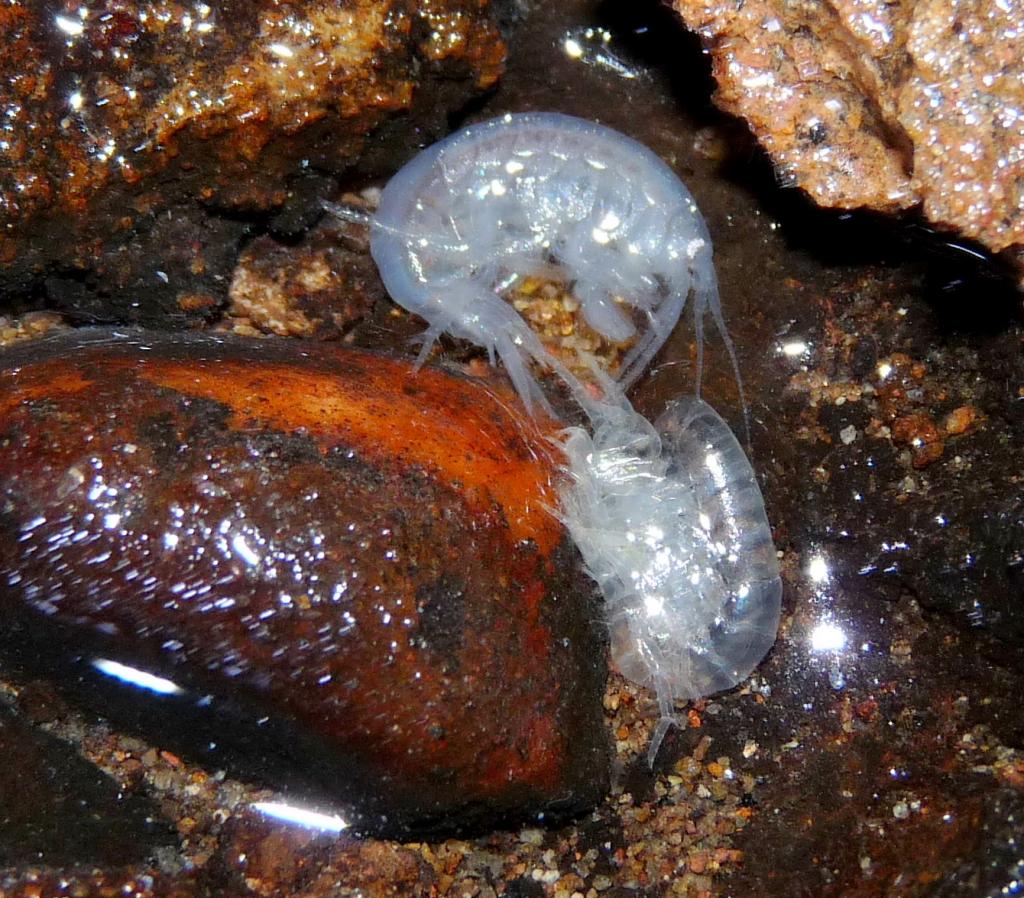 These three images show depigmented subterranean Gammarus pulex and have been added to avoid confusion with Niphargus species.  Gammarus pulex is a common inhabitant of many surface freshwater habitats (mostly streams and rivers), where it is generally orange or yellow in colour with dark eyes at the front of the head.  Where such streams enter cave systems they often carry in invertebrates living within them, most of which eventually die due to lack of food, or an inability to complete their life cycle.  Gammarus pulex however has shown itself to be remarkably adaptable and able to not only survive but also breed underground.  Freshly washed in specimens will still retain their orange colouration and dark eye spots and thus will be easy to differentiate from hypogean Crustacea.  However, where breeding populations become established in cave streams, then successive generations show a progressive lack of pigment, such that they can resemble the true subterranean shrimps such as Niphargus and Crangonyx subterrnaneus.  Note that even though the eyes also become white they are still clearly visible at the front of the head.  Although G. pulex is most likely to be found in cave streams, some isolated populations can be found in higher passages (e.g. Barnes Loop in Swildon's Hole on the Mendips and Elm Hole in the Clydach Gorge, South Wales) where they are washed in from above via fissure flow.  In such habitats they can co-occur with Niphargus and Proasellus cavaticus and it is these populations that are most likely to exhibit the highest degree of depigmentation shown in the illustrated examples.  In caves in the north of England (Peak District and Yorkshire), where Niphargus have not been recorded so far, any white shrimp-like animal in a cave is almost certainly Gammarus pulex, although if not sure then the scheme organiser would be happy to examine any collected specimens or photographs.  The same comments above also apply to Gammarus duebeni celticus which is widespread in cave streams in Ireland. 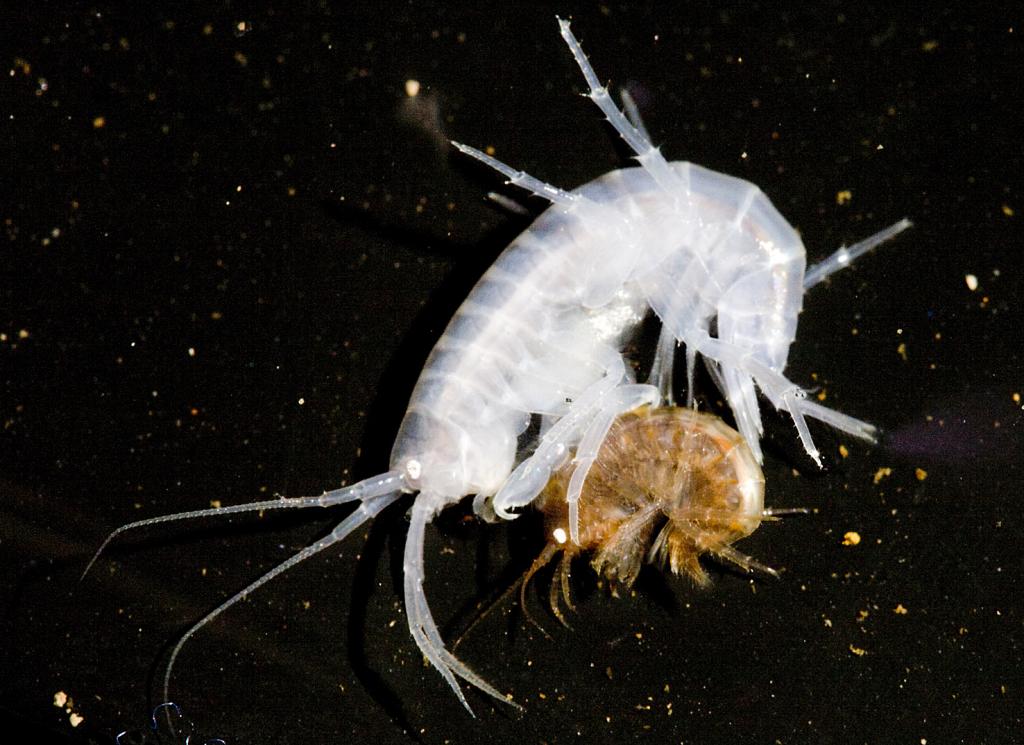