Microniphargus leruthi was first recorded in Ireland in Counties Cork and Louth in 2006 (Arnscheidt, et al. 2008; 2012) and was then recorded from interstitial gravels beside the Dripsey River, County Cork in 2008 (Penk and Knight 2008; Knight and Penk 2010) and in two caves, Gragon West and Doonyvarden in the Burren, County Clare, in 2009, where it was recorded along with N. irlandicus and N. wexfordensis respectively. Arnscheidt et al. (2012) recorded it from six boreholes during sampling in 2008 to 2010, including counties Waterford, Offally and Kildare. The species’ small size means that it has probably been overlooked in the past and it was thought that it was very likely to be present in the British Isles, especially along the east coast.  In early 2010 Microniphargus was discovered at several locations in Swildon's Hole, a cave system in the Mendip Hills of Somerset; and analysis of samples, collected as part of the Groundwater Animals UK project, subsequently identified the species in samples from a well and borehole in North Devon and a well, two boreholes and a spring in Dorset. Survey work by members of the British Geological Society in 2010 recorded Microniphargus in three boreholes in the Great Oolite Limestone near Cirencester, Gloucestershire. In 2011 and 2012 the species was collected from two further caves (Sweetwater Pot and Radford) in South Devon and from various other sites across southern England, including a borehole on the Isle of Wight.  In 2011 the species was recorded for the first time in Wales at the Schwyll Spring outflow and was subsequently discovered at several other Welsh sites, including the Ogof Draenen cave system in Breconshire.  It is now known to occur from East Anglia and Kent in the east to Pembrokeshire and Devon in the west, with recent northern records including a spring near Dyserth in North Wales and a borehole near Worksop in South West Yorkshire.

Prior to 2006, Microniphargus was unknown from Britain and Ireland and was previously thought to have a very limited area of distribution, between the Ardennes and the northern Rhine region. It has been recorded at various sites in Luxembourg, Belgium (including Engihoul Cave, wells near Liège (Karaman & Ruffo, 1986) and Grotte Comblain) and western Germany (including caves and wells / boreholes). The discovery of Microniphargus in Ireland and Britain has great significance in our understanding of the distribution of the stygobitic Crustacea and the recent reports represent a big jump in the known distribution of the species from the Ardennes of Belgium. County Cork and most of the British records lie to the south of the last glacial limit; the remaining Irish records and those from North Wales and Yorkshire lie to the north.  The Irish and British specimens match the described morphology of Microniphargus and a morphological comparison with European material from the Berlin Museum has been carried out by Terry Gledhill of the Freshwater Biological Association (Knight & Gledhill, 2010).  A recent molecular study (Weber et al. 2021) has revealed that Microniphargus consists of at least three 'cryptic' species, two each endemic to Ireland and Britain, and a third which occurs in both Belgium and Britain.  This same study has also shown that Microniphargus is genetically closer to the genus Pseudoniphargus, in the Family Pseudoniphaergidae, with which it also shares morphological features, rather than Niphargus, and thus should perhaps be moved to the Family Pseudoniphargidae.  However, this study is based on a fairly limited number of specimens from a few locations and further research into the topic is required.

Microniphargus leruthi has specific characters, such as its small size (1-2mm) and the shape of the mandiblular palp, telson and gnathopods that set it apart from other genera in the family Niphargidae (Karaman & Ruffo, 1986). The third segment of the mandidular palp does not have a fringe of small bristles. The gnathopds are slightly longer than broad and appear rather rectangular, the second segment has a distinct protrusion. The telson is as long as wide, has a V-notch (as opposed to a cleft / split in other species) to about halfway and each lobe ends in a single spine. Other differences include the pleopods with two branches and the laccinia of the maxilla with a maximum number of seven spines. These features are illustrated in the sketches below. 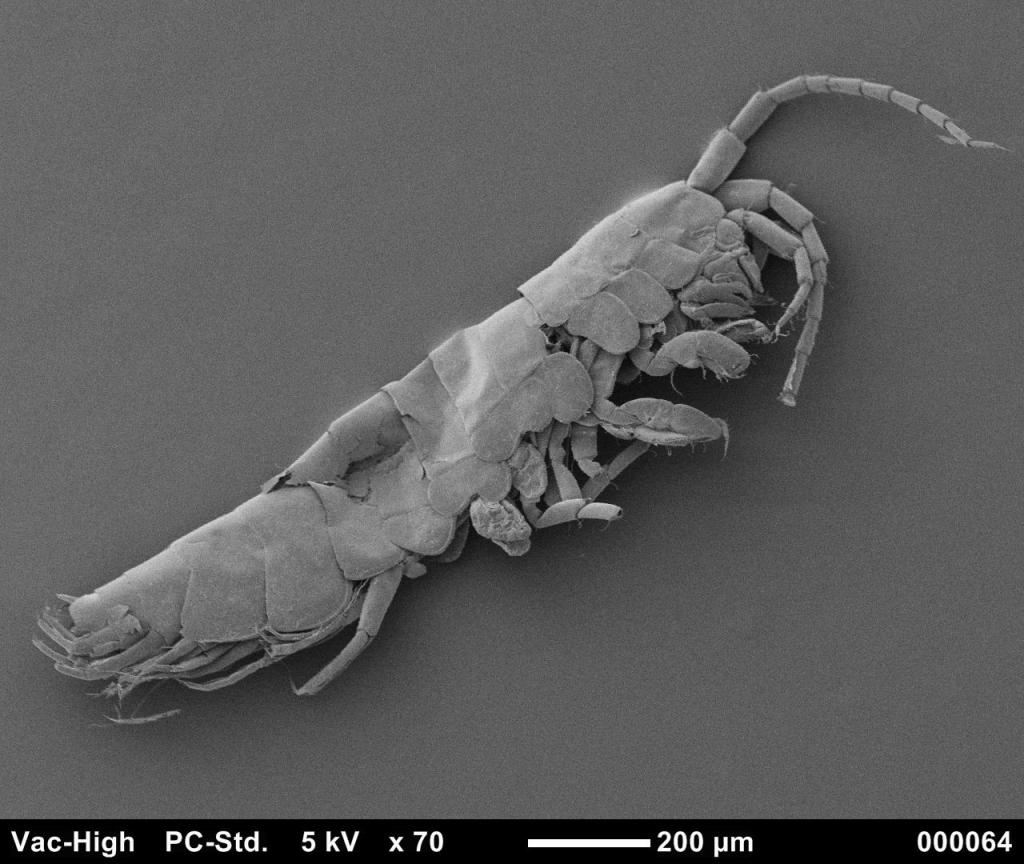 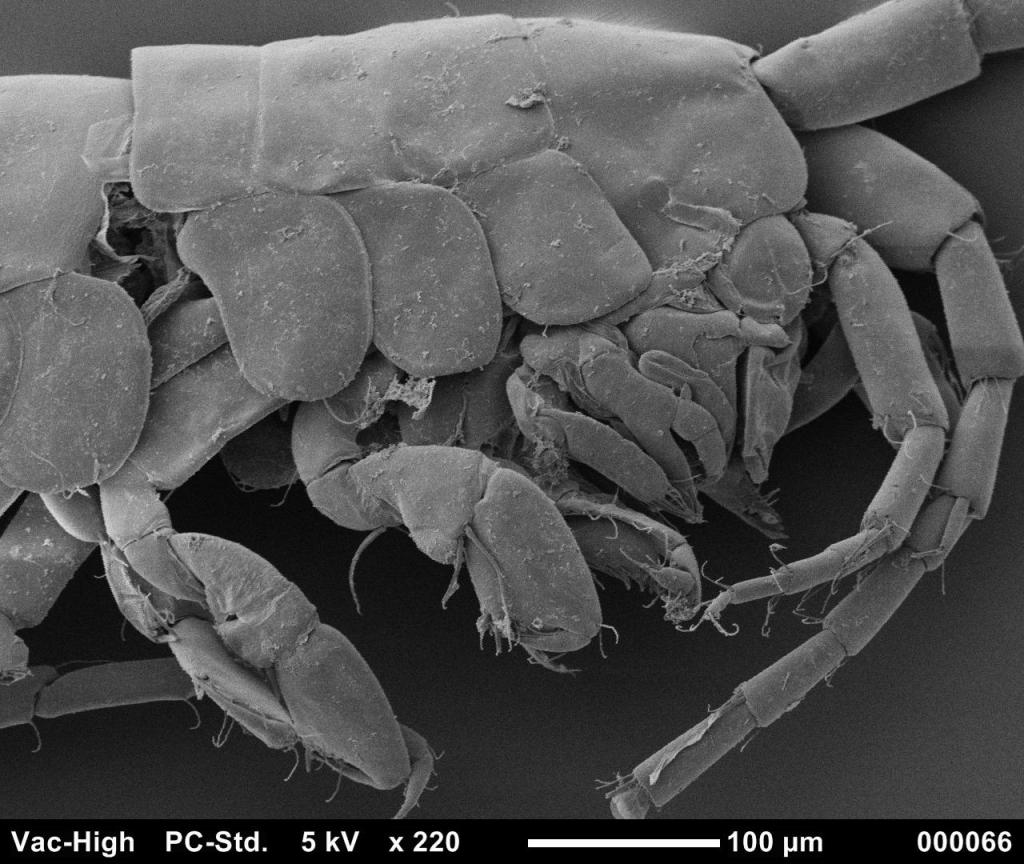 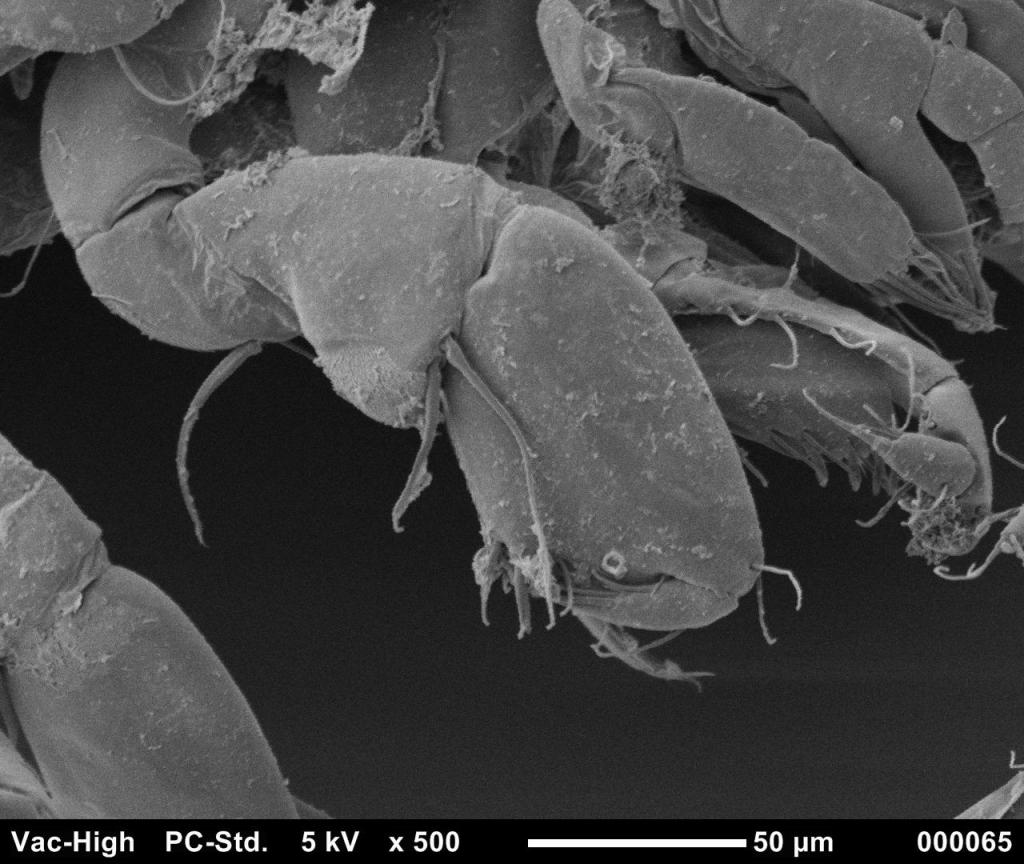 Electron Micrographs of Microniphargus leruthi showing details of the gnathopods, in particular the rectangular shape of the first segment and the protrusion on the second segment (photos courtesy of Jules Carter).